A Look At The Lithium-Ion Battery Recycling Industry And Companies

Note: This article first appeared on Trend Investing on December 20, therefore all information is as of that date.

As lithium-ion (Li-ion) batteries continue to electrify our world, over 11 million tonnes of spent Li-ion batteries will be discarded through to 2030. This means a very significant opportunity exists for Li-ion battery recycling.

The history of Li-ion battery recycling

Less than 5% of spent lithium-ion batteries are recycled today. The reason for why it has not been widely practiced in the past is mostly due to poor economics. The following quote from a 2011 article helps explain why:

Recycling lithium-ion batteries is an incredibly complex and expensive undertaking that includes:

The process is economic when a ton of batteries contains up to 600 pounds of recoverable cobalt that’s worth $40 a pound. The instant you take the cobalt out of the equation, the process becomes hopelessly uneconomic.

The reason Li-ion battery recycling has previously been uneconomic is the complexity and low yield of recycling. The retrieved raw material barely pays for labor, which includes collection, transport, sorting into batteries chemistries, shredding, separation of metallic and non-metallic materials, neutralizing hazardous substances, smelting, and purification of the recovered metals. It is often cheaper to mine raw material than to retrieve it from recycling. Lithium from recycled batteries is commonly used for non-battery applications, such as lubricating greases that are found in WD-40 and other products, rather than batteries. 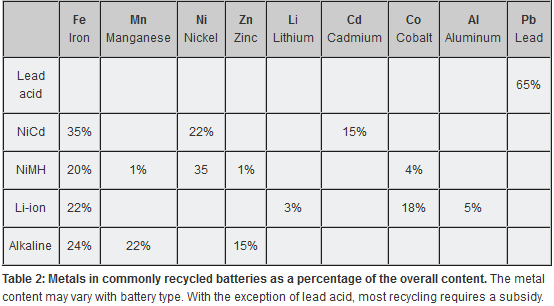 Fast forward to now (late 2017) and the electric vehicle (EV) boom has led to a lithium and cobalt price boom, thereby making Li-ion battery recycling potentially profitable. Investors need to remember if we return to low cobalt and low lithium prices, or cobalt was to be removed from the battery chemistry (unlikely for now) then recycling may again struggle to be economic. You can read more here on the economics of battery recycling.

The current state of the Li-ion battery recycling industry

A look at the main Li-ion battery recycling companies

American Manganese state about their company strategy: “To recycle valuable cathode materials for the global lithium electric vehicle battery industry. The process eliminates the need for heat and furnaces, as the recovery of the metals take place at ambient temperatures. The result is a cleaner, environmentally sustainable, robust recycling alternative to current disposal methods.” The company uses a hydro metallurgy process and says that they can recover “100% of cobalt and 87% of lithium” from the Li-ion battery.

Apple’s Liam robot disassembles the iPhone to recover metals such as cobalt and gold. A recent BBC report says, “Apple is a leader in this field, marshalling a line of robots called Liam to disassemble used iPhones in a few seconds, enabling recovery and reuse of many of the materials used, such as cobalt, indium and gold.” Green Technology Solutions state on their website that they “believes the e-cycling (electronic recycling) industry is developing into a goldmine. Although lithium prices have exploded as a result of skyrocketing demand from manufacturers, very few companies are set up to recycle lithium-ion batteries and other electronic goods. Only 20-40 percent of cell phone and consumer batteries are currently recycled, leaving an incredible opportunity waiting to be seized by forward-looking companies like GTSO`s mining subsidiary, GTSO Resources.”

One to watch, especially being based in California, USA.

Johnson Matthey is a specialty chemicals company, which manufactures catalysts, pharmaceuticals materials, and pollution control systems. The company is the largest global full service refiner of precious metals with 200 years of experience in recycling and management. Their main focus now has been on the platinum group metals recycling. Johnson Matthey produces a cathode variety called lithium iron phosphate (LFP) commercially, but is scaling up in other materials. Previous acquisitions included A123 and Clariant to combine to form Johnson Matthey’s Battery Technologies business.

Neometals is primarily a lithium mining company in Western Australia. They own a 13.8% share of the Mt Marion lithium spodumene producing mine. The company has plans to develop a Kalgoorlie lithium hydroxide facility. You can read more on that here. The company also has the world’s second highest titanium resource, and some vanadium. Neometals has co-developed a Li-ion battery recycling technology to economically recover high-value cobalt (99.2% recovery). Recently, the company has constructed a recycling hydrometallurgical pilot plant in Ontario, Canada where wet commissioning has commenced. The plant will complete continuous test work at a rate of 100kg/day of batteries, testing the recovery of high-purity cobalt, lithium, nickel and other base metals from lithium batteries typically used in the electric vehicles (Lithium-Nickel-Manganese-Cobalt or NMC).

OnTo develops and patents advanced battery recycling innovations that produce manufacturing quality electrode materials from recycled batteries. These breakthrough technologies are available to serve the battery and environmental services industries. The new technology can reduce the cost of recycling and produce advanced materials for manufacturing batteries useful in applications from portable power to electric vehicles.

Retriev state on their website that they are “the most forward thinking company in recycling today! Regardless of the chemistry, we can manage your batteries through a single recycling process. We have been recycling lithium batteries for over 20 years and have processed over 25 million pounds.”

Since 2006, Umicore has provided recycling services for lithium-ion (Li-ion), Lithium Polymer and Nickel Metal Hydride batteries (NiMH) from all possible applications across the globe. From these batteries, valuable metals are recovered so that they can be converted into active cathode materials for the production of new rechargeable batteries.

By combining a unique pyro-metallurgical treatment and a state-of-the-art hydro-metallurgical process, Umicore is able to recycle all types and all sizes of Li-ion and NiMH batteries in the most sustainable way. You can read more on their process here. “Umicore’s strategic growth investments in clean mobility materials and recycling are progressing according to plan. The expansion to triple capacity for cathode materials in China and Korea by the end of 2018 is underway and the new capacity will gradually come on stream starting in the second half of 2017.”

Umicore, which has invested €25m (£22.6m) into an industrial pilot plant in Antwerp to recycle lithium-ion batteries, has deals in Europe with both Tesla (TSLA) and Toyota (TM) to use smelting to recover precious metals such as cobalt and nickel. While commercial smelting processes such as Umicore’s can easily recover many metals, they can’t directly recover the vital lithium, which ends up in a mixed byproduct. Umicore says it can reclaim lithium from the byproduct, but each extra process adds cost. Investment bank Morgan Stanley in June said it forecast no recycling of lithium at all over the decade ahead, and that there risked being insufficient recycling infrastructure in place when the current wave of batteries die.

The lithium-ion battery recycling industry is in its infancy, and still has a lot to prove it can be done economically. With current high pricing for cobalt and lithium, and a huge demand wave for Li-ion batteries on the way (currently 26 megafactories planned to be producing by 2021), the Li-ion recycling industry may soon emerge as a new trend.

For now, Umicore is a global leader in the field, and a solid buy, albeit a non-pure play on the lithium recycling business. Near term Neometals is most likely to be the next serious Li-ion battery recycler by late 2018 and after that perhaps American Manganese. These would be my current top three picks in the sector, with perhaps Neometals as my favorite. Investors should invest cautiously given the risks associated with an emerging industry that has historically been uneconomic.